Although known as the most important secondary sexual characteristic, female nipples frequently become hypertrophic or elongated due to breastfeeding, aging, overstimulation, or genetic factors. Mild cases might affect appearance and confidence, but severe cases can cause troubles with clothing. Thus, nipple reduction and shortening should be taken into account for appropriate correction. The surgery involves two steps: first is reducing the frontal visual area of the nipples to change the size, and the second is decreasing the profile height to improve nipple length. Most patients would need to undergo both the above-mentioned steps to reach the perfect results, although in some mild cases, only one step is adequate. 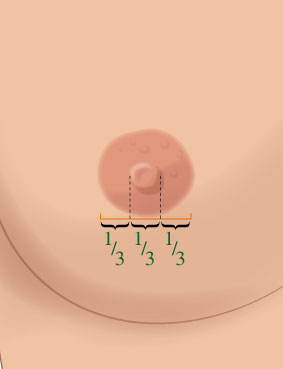 Standard ratio of nipples to areola

Esthetic nipples are subject to specific calculation standards. Generally, the golden ratio is when the nipple and areola on both sides appear as trisections (1:1:1). In other words, it is perfect when the nipple is approximately one-third of the areola. Thus, nipple reduction should also follow this golden standard. At present, there are two common procedures of reducing the nipple surface area (size):

To shorten nipple length, annular skin excision is performed at the border between the root of the nipples and areola (nipple base). Circulation between the mammary duct and blood can be maintained. Lastly, the two ends of the cutting skin are pulled together and re-stitched. By tension sutures, nipple height (length) can thus be effectively shortened. This surgery completely preserves the mammary ducts and affects breastfeeding. However, the degree of shortening is up to half the nipple height, and the nipples might grow a bit in the future. This surgery is often performed as a part of nipple reduction, along with lateral wedge resection.