This bone cutting surgery is for correcting the backward retraction or under-development of the chin (chinless or short chin problem). The main goal is forward and downward elongation of the chin for increasing the length of the lower face; it is also called “chin elongation surgery” or “osseous augmented genioplasty.” During the procedure, Dr. Chuang will make a 4–5-cm incision in the lower gum, transversely cut off or segmentally remove a part of the extra chinbone from the surgical plane right below the mental nerve; then, he will use different techniques, such as sliding forward, lifting upward, or pulling downward, to adjust the position of the bone cross-sections to various angles and fix the bone with titanium bone plates and screws or steel wires. Finally, the surgery will be finished after confirming that the central of the chin is in the correct position. If there is any uneven or indented surface on the interface part of the cross-sections, Dr. Chuang will further resect and grind the lower edges of the mandible or perform V-line chinbone and extensive mandible reductions to make the contour of the entire lower face much smaller, smoother, and “V”-shaped. Accordingly, the combination of various bone reductions will make their application more flexible and personalized.

This surgery is mainly suitable for patients whose chinbone is thick and solid but looks backward retracted in the side view. It will achieve the goal of forward elongation of the chin without implants and consequently avoid the complications associated with prostheses. However, such chinbone osteotomy is an inappropriate treatment for the micrognathia cases caused by congenital chinbone hypoplasia. Because the bone volume and mass in these patients are much less than those in normal people, the present chinbone osteotomy is more likely to cause bone mass loss. In addition, hastily performing this surgery will result in some unnatural chin or mandible contours such as too small or too pointed chin or will create a visible uneven or indented skin surface on both back sides of the chin around the interface of bone cutting cross-sections, which greatly reduce the surgical integrity. Conclusively, in patients with a small or severe withdrawn chinbone, a Medpor contour implant is still the preferred and corrective solution. 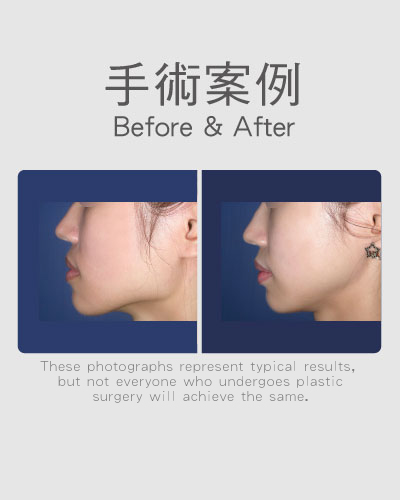